Symbols and Traditions - Caduceus vs. Aesculapius 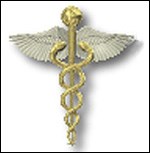 Medicine and the medical profession have been represented throughout history by various combinations of a snake or snakes and the caduceus, each of which has significant meanings.
The word caduceus is derived from a Greek root meaning herald's wand or badge of office. Originally, the caduceus was an olive branch, but it was later replaced by a staff entwined with snakes.

The caduceus is strongly associated with Hermes, the Greek messenger of the gods. Although he is not intimately connected with healing, Hermes is cited as the guardian of health. He received the staff from Apollo who gave it to him as a token of admiration to carry as a symbol of his office. According to Apollo, the staff, with its two winged snakes, was to bring peace and overcome disease.

The medical symbolism connected to the staff and snake has descended most vividly from Greek mythology in connection with the healer Aesculapius. Aesculapius' parents were the mortal Coronis and Apollo, the god who possessed all medical knowledge. Apollo passed along his healing powers to the centaur Chiron and gave Aesculapius into his care.

One day Aesculapius saw a snake crawl from a crack in the earth and entwine itself on his staff. Aesculapius killed the snake, but immediately thereafter another snake emerged from the crack carrying an herbal leaf in his mouth; it placed the leaf on the head of the dead snake, which miraculously revived.

The serpent became Aesculapius' constant companion, and Aesculapius became the patron of the temples of healing that sprang up throughout Greece.