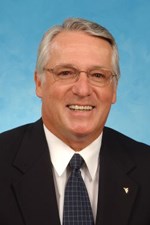 A native of Muskegon, Michigan, Dr. Murray graduated AOA from the University of Michigan School of Medicine. His surgical residencies were served at The Johns Hopkins and Massachusetts General Hospitals. Following service in the United States Navy, he joined the faculty of the University of North Carolina, Chapel Hill, and rose to full professor. At West Virginia University Health Sciences Center, he has served as Chairman of the Department of Surgery, Chief of Cardiothoracic Surgery, Director of the Thoracic Residency Program and Chief of Surgical Services at West Virginia University Hospitals. His professional affiliations have included the STS (Vice-President and Secretary), STSA (President), TSDA (President), ABTS (Examination Chair), TSFRE (Director), and Halsted Society (President), as well as active participation in the AATS, ACCP, ASA and SSA. Dr. Murray is married to Sharon Marsden Murray, and they are the parents of Bren, Bruce, and Bill (deceased), and the proud grandparents of Sharon, Kate, Laura and Will.