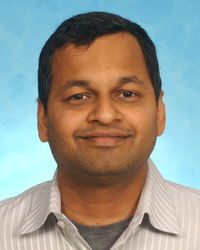 Proteins move at the rate of 1000 molecules per second in photoreceptor cells between different compartments. Defects in this process lead to blindness in humans. How do proteins move at this rapid rate? How are proteins retained in different compartments? We are currently testing our hypothesis that small GTPases play an important role in regulating protein trafficking between different regions of photoreceptor cells.

How do multimeric proteins assemble? We use phosphodiesterase-6 as a model system to understand protein assembly. We believe protein-lipid modification contributes to this process and are currently testing this hypothesis.

We used adeno-associated viral mediated gene therapy to restore vision in a mouse model for severe childhood blindness. We hope to expand this line of research using cutting-edge genome engineering methods such as TALENs and CRISPR system for stem cell therapy.

As an alternative to gene therapy, we are exploring the use of small molecule translational read-through suppressors to overcome non-sense mutations that lead to diseases. This project is in collaboration with Dr. Brian Popp in the Chemistry Department.

Defects in ubiquitously expressed splicing genes are a cause of retinitis pigmentosa (RP) in humans. In collaboration with Dr. Peter Stoilov at Biochemistry, we are identifying the mechanism behind splicing defects and blindness. The hope is to use the knowledge gained in this study to design novel treatments for patients with RP.