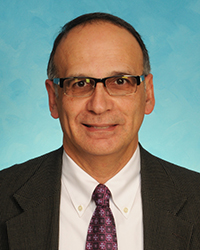 The Berrebi lab’s research program addresses the principles of organization of neuronal microcircuits in the central auditory pathway, with particular emphasis on chemical phenotypes that can be revealed with immunocytochemical techniques. Brain microinjections (physiological transport/tract-tracing) are employed to uncover the input-output relations of specific neuronal populations, and electron microscopy is utilized to characterize the ultrastructural features of auditory neurons and their synaptic inputs. We also perform in vivo extracellular recordings of sound-evoked activity in brainstem neurons, and selectively block receptors for inhibitory neurotransmitters to uncover the role of inhibition in shaping the response properties of the cell population under study. By unraveling complex neural pathways, our goal is to contribute to a better understanding of neural mechanisms of hearing, and to the development of refined cochlear and cochlear nucleus prostheses.

We are interested in the principles of organization of neuronal circuits in the auditory brainstem. Various anatomical and physiological techniques are employed to uncover the structure and function of nuclei of the superior olive in order to better understand their roles in hearing. Immunocytochemical techniques reveal the neurotransmitters used by specific populations of cells, and tract-tracing methods uncover their synaptic targets and source of inputs. This type of work is performed at both the light and electron microscopic levels.

In our electrophysiology lab, we perform in vivo extracellular recordings of sound-evoked activity in brainstem neurons, and selectively block receptors for inhibitory neurotransmitters to uncover the role of inhibition in shaping their response properties.

Our work addresses the principles of organization of particular neuronal microcircuits and utilizes anatomical and cytological techniques, with emphasis on characteristic chemical phenotypes that can be revealed with immunocytochemistry. The research is centered on a pair of nuclei in the mammalian auditory brainstem, the MNTB and the SPON. To reveal the synaptic connectivity of these cell groups, we use brain microinjections of substances that are subsequently transported via physiological transport mechanisms. Both light and electron microscopy are used to analyze these sorts of data, as the resolution required to identify a synaptic contact unequivocally is only achieved atthe ultrastructural level.

Our long term goal is to develop a better understanding of neural mechanisms underlying hearing, and thereby contribute to the development of refined prosthetic devices to assist the hearing impaired.