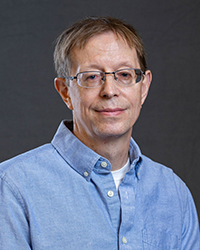 Unicellular organisms (microbes) experience massive protein misfolding during heat shock (temperature spike). Misfolded proteins are cytotoxic and could perturb proteostasis over time unless re-folded or purged. Thus, the survival of microbes critically depends on the network of molecular chaperones orchestrating the folding and degradation of nascent or damaged proteins.

Some types of chaperones are common for all living cells, however some of them are specific for microbes and absent in mammals. One could argue that homeothermic mammals hardly ever experience heat shock. Yet, mammalian neurons are known to be vulnerable to protein misfolding caused by mutations, as observed in neurodegenerative diseases.

My lab uses cross-species genetics to explore therapeutic potential of microbial chaperones in mammals. Specifically, we are pursuing new strategies against neurodegenerative diseases caused by protein misfolding. We have generated transgenic mice expressing a molecular chaperone from thermophilic archaea. We are testing the potency of this archaeal chaperon to counteract the development of currently incurable blinding disease, retinitis pigmentosa. In addition, we are developing viral vector for the chaperone delivery, and adopting different types of microbial chaperones for the treatment.

Chaperonins are ring-shaped ATPase complexes found in all living cells including prokaryotes, archaea, and eukaryotes. Chaperonins are responsible for the folding of cytosolic proteins in their central cavity. When a chaperonin encapsulates its protein substrate, it segregates it from intracellular molecular environment, which facilitates its correct folding. Chaperonin’s activity is integrated into the cellular chaperone network.

Procaryotic GroEL/ES complex is the most studied chaperonin. Its eukaryotic counterpart, chaperonin containing t-complex protein 1, commonly abbreviated as CCT or TRiC, is structurally more complex, which makes it more difficult to study. The known CCT/TRiC substrates are actin, tubulin, and heterotrimeric G proteins. Other CCT/TRiC substrates in specialized mammalian cells remain unknown, because CCT/TRiC was predominantly studied in yeasts.

One of our projects focuses on the function of CCT/TRiC in specialized mammalian neurons. Our goal is to identify new CCT/TRiC substrates, and to determine how the selection of substrates is regulated. We also seek to decipher the response of the chaperonin system to neurodegenerative conditions. Towards this goal, we genetically introduced epitope tag into CCT/TRiC, which allows us to purify intact chaperonin complex from the cells. We are using this model to analyze proteins that interact with CCT/TRiC, including its substrates and regulatory co-factors.