Beginning with Dr. Raylman's 1991 Ph.D. (Reduction of positron range effects by the application of a magnetic field: For use with positron emission tomography) our group has a long-standing, multi-year involvement in the development of combined MRI and PET systems.  The different PET-MRI systems developed at WVU are described below.

Our first system consisted of two opposed detector heads, operating in coincidence mode. Each MRI-PET detector module consisted of an array of LSO detector elements (20x20 arrays of 2.5x2.5x15mm3 LSO elements) coupled through a long fiber optic light guide to a single Hamamatsu flat panel position sensitive photomultipier tube (PSPMT). The use of light guides allowed the PSPMTs to be positioned outside the bore of a 3T MRI scanner where the magnetic field is relatively small. The custom MRI saddle coil was constructed by our group.  To test the device, simultaneous MRI and PET images of the brain of a male Sprague Dawley rat injected with FDG were successfully obtained. The images revealed no apparent artifacts in either image set.

Pictures and images from the combined MRI and PET imaging of a rat. (A) The prototype MRI-PET insert. The tube in the center of the photo is supplying gaseous anesthesia to the rat; (B) Picture of the MRI-PET imaging insert inside the 3T MRI scanner; (C) co-registered FDG PET-MRI sagittal image of a rat head. Areas of increased FDG uptake have been labeled: a is the anterior cerebral cortex in the region where olfactory and pre-optic areas reside, b is the olfactory bulb and c indicates the position of the medulla oblongata. The label d shows the position of the spinal chord. Enhanced FDG accumulation in the cerebellum is labeled e. The areas labeled f and g are regions of extra-cranial FDG uptake.

While the imaging aspects of MRI-PET could be substantial, the real power of MRI-PET may be the acquisition of PET images in conjunction with magnetic resonance spectroscopy (MRS) data. To explore this concept, we modified our MRI-PET system so that it was better suited to acquire MRS data. This task required replacement of the saddle RF coil used to image the rat with a twelve-leg birdcage RF coil (Nova Medical, LLC). 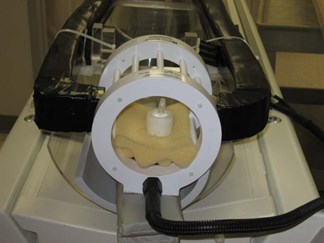 Co-registered MRI-PET image of the sphere containing the metabolites.

Encouraged by the the success of the limited-angle PET/MRI scanner, our group has recently developed an MRI-PET insert for a Siemens 3T Verio scanner. This  system consists of a ring of water-cooled,  silicon photomultipliers and custom MRI RF coils.   This project is a collaborative effort among West Virginia University, Nova Medical, LLC., the University of Maryland Medical School and the University of Washington. 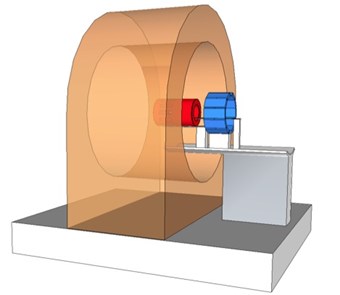 Although the PET scanner is not located inside the bore of the MRI scanner, there is still a relatively high magnitude magnetic field present at its position.  Consequently, the standard PSPMTs had to be replaced by arrays of SiPMs (Array4p9 from SensL Photonics).  Specifically, two Array4p9s were coupled through a thin light guide to a 26x58 array of LYSO detector elements (1.51.510mm^3; pitch= 1.57mm) to create a PET detector module.  The performance of the SIPM was enhanced by cooling them to ~10degC by surrounding the edges of each module with a copper enclosure cooled with circulating fluid (see picture below)  The presence of the copper cooling jackets in the bore of the MR scanner would normally be problematic, but since the PET scanner is not inside the MRI there are no deleterious effects on the MRI image quality.  To create the scanner, twelve detector modules were formed into a ring (see picture below). 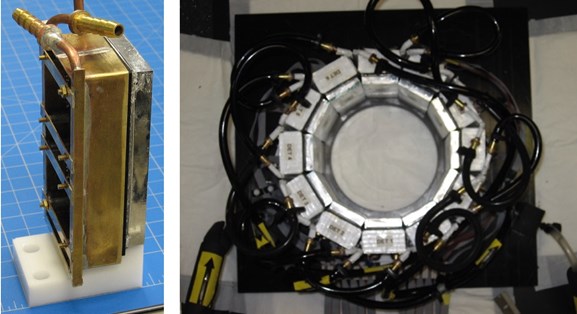 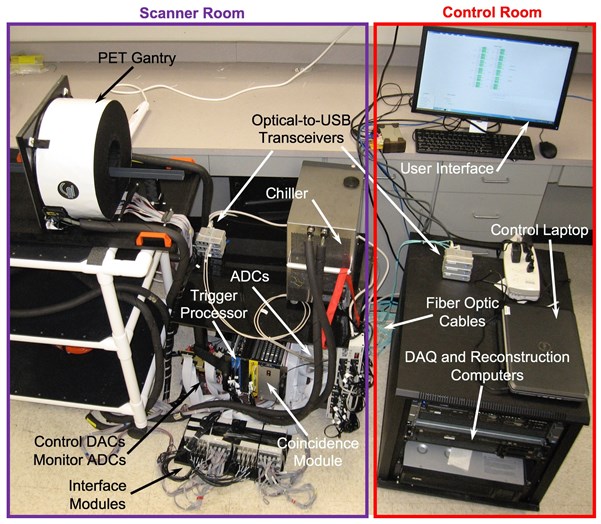 Picture showing the complete PET component of the system.  Note that the elements located in the MRI scanner and control rooms are labeled. 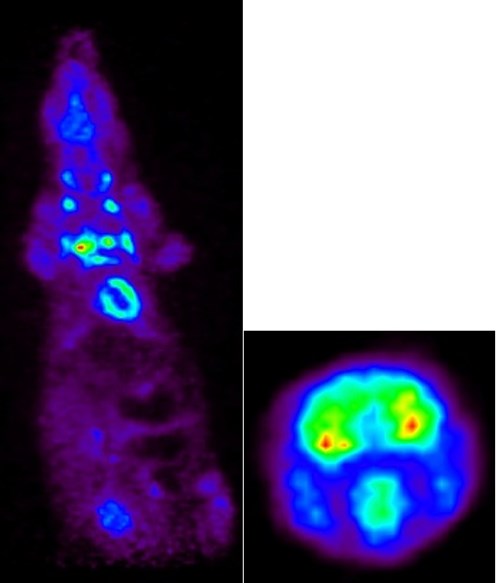 In addition to the PET scanner insert, two custom RF antennas (8cm and 12cm diameters) optimized for use with small animals (rats to rabbits) were constructed in collaboration with Nova Medical, LLC.  These birdcage coils have transmit-receive capabilities with dual-preamplifier interfaces.  A small track connects the MRI and PET components of the system so that the enclosure holding the animal can positioned in each scanner.

Pictures showing insert at its extended position (left) and inserted into the 3T Vereo scanner (right).

MR image of micro-hot rod phantom (the diameters of the rods are shown) (a), PET image of the phantom (b) and registered image (c).

This work was supported in part by the National Institute of Biomedical Imaging and Bioengineering (Grant Number R01 EB007349).

MRI-PET Publications from our Group