Imagine if studying for a class test could not only get you a better grade, but potentially save your neighbor’s life. For one West Virginia University medical student with an upcoming ultrasound exam, practicing using a portable Vscan ultrasound machine resulted in just that.

When first-year medical student Kent Marshall took home the Vscan device to practice skills he learned in lectures, he didn’t imagine a device no larger than his cell phone could have such a big effect on a close family friend.

“I hadn’t intended to change anyone’s life, it was absolutely a case of being in the right place at the right time with the right equipment,” said Marshall. “The department allows students to bring home Vscans so we can practice and refine our skills. My plan was to practice on my wife’s knee, finding and identifying the normal ligaments, veins and arteries.”

But, by the end of the day, Marshall may have averted a critical medical emergency by identifying a potential case of deep vein thrombosis that could’ve led to a critical health problem for a man he identifies as his “adopted grandfather,” William “Bill” Tribett.

The two have struck up a friendship through the years, which was initiated by Marshall mowing the adjoining property Tribett owns in addition to his own. While Marshall was studying, Tribett came by to check on things at his property and mentioned in passing that he had twisted his knee while getting out of his truck earlier. He offered the medical student a chance to look at it.

“It was swollen and sore, but I really didn’t think too much of it,” recounted Tribett. “But, just as I know that Kent would do anything for me and my family, it was an opportunity to help him study and see something different so I offered to let him take a look.”

Marshall began to examine Tribett’s swollen knee, noting an abnormality with the veins in the leg, noticing that they didn’t collapse under pressure as they normally should.

“I fully recognize I’m a student who is still learning, but I recognized what I saw as textbook deep vein thrombosis, matching exactly the slides from Dr. Minardi I saw in class,” said Marshall. “Being friends with Bill, he’s told me a little bit about his previous medical history, and I tried to relay both the seriousness of the situation and the urgency of getting it checked out by his physician to be sure.”

After some convincing and the swelling and pain not really subsiding, Tribett eventually went to the emergency room. The staff there came back with the same diagnosis as Marshall did and Tribett received further treatment.

When he learned about the story, the faculty member who teaches point-of-care ultrasound, Joseph Minardi, M.D., was impressed with Marshall.

“Ultrasound is an invaluable tool; when you can see what’s happening inside the body in real time, it’s more efficient, expediting diagnosis and treatment. The in-depth, hands-on ultrasound experience provided for medical students at WVU equips them provide a high level of patient care in their future careers,” said Minardi, a professor from the Departments of Emergency Medicine and Medical Education.

“What we can’t teach in class or labs is intellectual curiosity. Successful physicians can leverage that curiosity to employ the tools at their disposal to find answers, think critically, and benefit their patients – something Kent exemplified,” added Minardi.

As for the exam? Marshall passed and Tribett is thankful for their continued friendship.

“Kent is a great guy and one of my happiest times was when he called and told me he got into medical school – I know all the hard work he’s put into his education,” concluded Tribett.

Marshall is enrolled in the M.D. program and hopes to earn a combined M.D./Ph.D. degree to continue on in neurological research as an end goal.

For more information about medical education at the WVU School of Medicine, visit https://medicine.hsc.wvu.edu/students/md-program/

WVU in the News: Doctors urge parents to catch kids up on other shots ahead of Covid-19 vaccine rollout 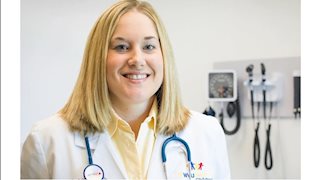 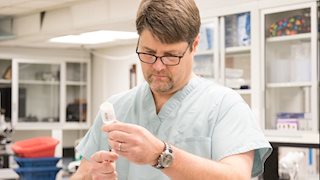 WVU researchers study the effects of vaping during pregnancy 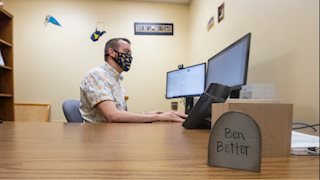 Too much, too little or just right: WVU researchers study proper ‘dosing’ of telehealth