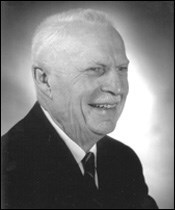 Edward J. Van Liere, M.D. was known as the "Father of the WVU Medical Center". He received his M.D. from Harvard Medical School and his Ph.D. from the University of Chicago.

Dr. Van Liere served as the Dean of the School of Medicine from 1937 until 1960. Dr. Van Liere developed the two-year medical school into a four-year accredited program. He was also a consultant to Surgeon General of the United States.