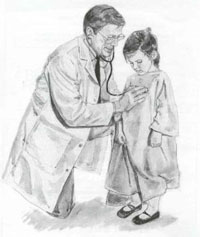 At the 2005 Phantom Ball, former Chair, William A. Neal, MD was recognized as a leader in children's healthcare. William A. Neal, MD was honored by Children's Hospital for his many years of service to the children of West Virginia. He served as the third Chair of the Department of Pediatrics, and under his leadership WVU Children's Hospital was established, the Morgantown Ronald McDonald House was constructed, participation in the Children's Miracle Network Telethon started, and many new pediatric specialties were brought to West Virginia. He also established the statewide program called CARDIAC (Coronary Artery Risk Detection in Appalachian Communities), winning national recognition from the Rural Health Association with the Louis Gorin Award for Outstanding Achievement in Rural Health Care.