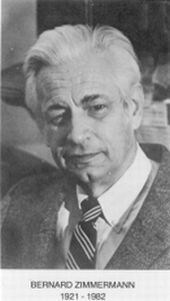 Bernard Zimmermann, MD became the first chairman of the Department of Surgery at West Virginia University in 1960. During his 13 years in this position, he simultaneously maintained an active research laboratory, recruited competent, able faculty members and developed an excellent surgical residency program. During the course of his career, Barney's insatiable curiosity for the unexplained produced many significant contributions, both laboratory and clinical, to knowledge in surgery...in electrolyte balance in postoperative patients, the role of the adrenal gland, the intricacies of antidiuretic hormone, the endocrine functions of the pancreas, the repair of iatrogenic biliary tract injuries...his profound intellect, his underlying warmth, his willingness to help and his dedicated interest in their welfare was soon recognized by all whom he touched. Transactions of the American Surgical Association, 1984.