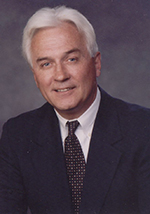 Peter Mucha, Jr., M.D. was born in Frackville, PA in 1943.  He completed medical school at Hahnemann Medical College, then residency at Mayo Graduate School of Medicine.  He served on the academic faculty at Mayo Medical School, Hahnemann University, and Pennsylvania State University.  He joined WVU in 1998 as Professor in Surgery and as the Director of Trauma and was able to establish the Jon Michael Moore Trauma Center at WVU as the first designated level one trauma center in the state.  He was an active member in 20 professional trauma and surgical societies, including AAST and EAST.  He was very active in the American College of Surgeons and served for several years on the state and national Committees on Trauma.  He provided leadership to some of the largest trauma organizations, including Western Trauma Association, for which he served as Vice President and President in the early 1990's.  He served on the editorial board and was a reviewer for seven peer-reviewed journals.  He authored 76 articles and book chapters, 27 published abstracts, and gave more than 350 professional presentations.  He was very dedicated to resident education and research.  He had a true passion for providing patient care that "is second to none" and was a strong force in establishing a trauma system in the state of West Virginia.  The Peter Mucha, Jr., M.D. Memorial Lecture in Trauma and Critical Care has been established to continue his legacy of dedication to the trauma system and education of all healthcare providers.