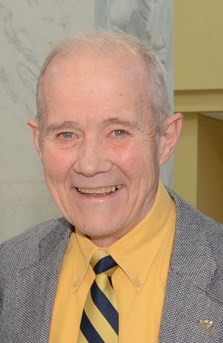 The Thomas H. Covey, Jr., M.D. Lectureship is established to honor and commemorate Dr. Covey's lifetime of service to the West Virginia University School of Medicine and the residents of West Virginia.

Dr. Thomas H. Covey, a native of Beckley, West Virginia, received his undergraduate degree from West Virginia University in 1957 and his MD from Harvard Medical School in 1961. Dr. Covey completed his surgical residency at the University of Michigan, returning to WVU to perform a research fellowship in the Department of Surgery in 1965. Dr. Covey joined the United States Army Medical Corps in 1967 and was honorably discharged in 1970 holding the rank of Major and title of Chief of the Surgical Section, 279th Station Hospital, Berlin, Germany.

Dr. Covey was active on the surgical faculty at Washington University School of Medicine until he was recruited back to WVU in 1984. At WVU Dr. Covey rose rapidly to the rank of Professor of Surgery, and also served as Interim Chair of the Department of Surgery, Residency Program Director, Chairman of the Promotion and Tenure Committee, Cancer Liaison Physician for Ruby Memorial Hospital and Interim Director of the Jon Michael Moore Trauma Center. He was the recipient of numerous teaching awards and research grants and continues to be active in teaching medical students.

Dr. Covey retired from the Department of Surgery in July of 2004 and continues to make Morgantown his home with his wife Hope. Dr. and Mrs. Covey have two daughters, Joda Lynn and Emily, and also two grandchildren.