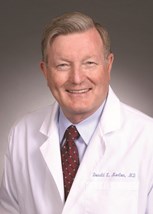 Dr. Morton, raised in the coalfields of West Virginia became one of the country’s foremost experts in the clinical treatment of melanoma.  The Department of Surgery honors his achievements in surgical oncology and proud Mountaineer heritage with the establishment of a lectureship in his honor at the West Virginia University School of Medicine.

He knew that more than 80 percent of melanoma cases had no nodal metastases on presentation, yet underwent aggressive nodal dissections. It was his insight that lymphatic drainage could be mapped using vital dyes, and the first, or “sentinel,” lymph node draining the area of the primary tumor bed could identify whether others behind it would also be involved. This insight would change the approach to melanoma surgery, and spare thousands the morbidity of aggressive nodal surgery.

He was born in Richwood, Nicholas County, in a house his father built with no running water. He attended Berea College in Kentucky, a Christian abolitionist school that offered full tuition to students from Appalachia. He completed undergraduate studies at the University of California in Berkeley. He received his MD and trained in surgery at UCSF and at the National Institutes of Health, where he stayed as senior surgeon and head of tumor immunology. He joined UCLA as chief of surgical oncology, then established the John Wayne Cancer Institute in Santa Monica.

He won the Jacobson award for innovation from the American College of Surgeons. He was a member of all the major professional societies in surgery, and was president of the Society of Surgical Oncology. He received continuous grant funding from the National Institutes of Health for more than 35 years. In 2000 he was the top investigator in grant funding from the agency. He was the author of nearly 700 peer review publications.