In life, we receive so much from our parents overall looks—hair color, height and a host of other genetically-driven predispositions. And, when children choose what to be when they grow up, they often follow in their parents’ footsteps. 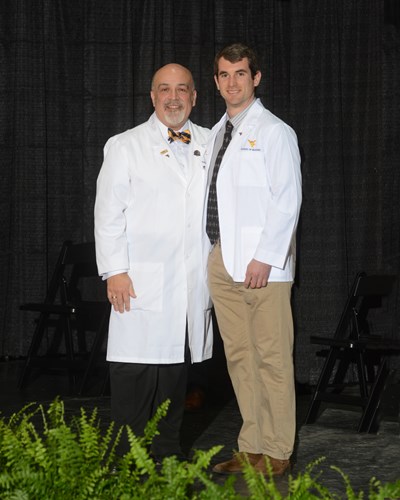 This rings true for Julian Fazi, a native of Altoona, Pennsylvania, who grew up surrounded by family members working in the medical field. Julian felt that medicine was his calling, but fearing he was overshadowed by his family influence, he decided to to put that resolution to the test.

“I entertained the idea of pursuing other professions in high school and college, but none of them seemed right,” Julian said. “I was inspired by how hard my dad worked as a doctor and found myself always coming back to medicine.”

After earning his bachelor’s degree in physics from Bucknell University, Julian started gearing up for his next move –  medical school. Choosing WVU seemed symbolic for multiple reasons.

“My family is originally from Weirton, West Virginia, and almost all of them went to WVU,” he said. “Before getting into medical school, I worked as a scribe at the Student Health Center and the Urgent Care in Suncrest Village. I had a great experience, met a lot of great people, and really liked Morgantown. It felt like home.”

As second-year medical students prepare to slip on their white coats, a momentous occasion that marks the beginning of their clinical careers, Julian reflects on his journey in the School of Medicine and labels it as challenging, yet intimate and rewarding. Rather than serving as a mere ceremony, the white coat welcomes those embarking on their medical careers to the community of physicians by giving them a powerful symbol of compassion and honor. It also provides a standard against which they must measure their every act of care to the patients who trust them.

“The first two years of medical school are very challenging; it really is a marathon,” Julian said. “The White Coat ceremony represents an accomplishment we can share together as a class. Being able to wear the white coat and work in the hospital is everything that we’ve worked so hard for.”

In addition to his studies, Julian managed to fill his time with activities geared towards developing his skills and serving others. He participated in the West Virginia Trauma Externship this past summer and spent three weeks shadowing a trauma team which exposed him to interesting cases.

Looking ahead a few years from now, Julian thinks that the surgical field would be a good fit for him. He is open, nonetheless, to exploring other specialties as he completes rotations in core clinical disciplines during the next two years.

“I still have so much to learn and experience in medical school, and right now I am concerned with getting the most out of each rotation that I am able to participate in,” he said. “I am also really excited for the rural rotations we are provided in our third and fourth years.”