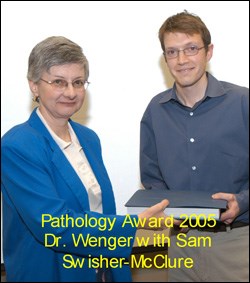 Nationally recognized award given by the American Society of Clinical Pathologists to honor the second year medical student from the University who shows the greatest general academic excellence and promise in pathology. This is given to the student who has the highest academic standing in the class. The Handbook of Clinical Pathology is given, along with a congratulatory letter from the national chair of this society. In addition, a monetary award from the WVU Department of Pathology is made.